It’s a risk to marry at a point in your life where you are so much yourself. It’s hard to make a place  in your life for a lover. I remember my friend Carolyn saying as she was falling in love with Jim, he’s fabulous, but is there any reason he has to have stuff? Why yes, that’s one reason Steve and I live in the same town and not the same house! Drums! Books!

The thing about Steve that tempted me into marriage at this age was not simply that he was someone I loved… although I do. It is that his passion for music is so huge, so much a piece of him, that I knew there would be room for my own passion for social justice and community. And there is.

It’s bumpy, of course it is. Two people used to having themselves and their work at the center of their lives are not the easiest bedfellows. But two people, each reflecting the other’s work… it’s a great thing.

Marriage anytime, but especially as you become more clearly you,  takes a lot of ego. It takes a lot of strength… It definitely takes Love to lead to Peace. Peace is a moving target! But the journey goes on from here… 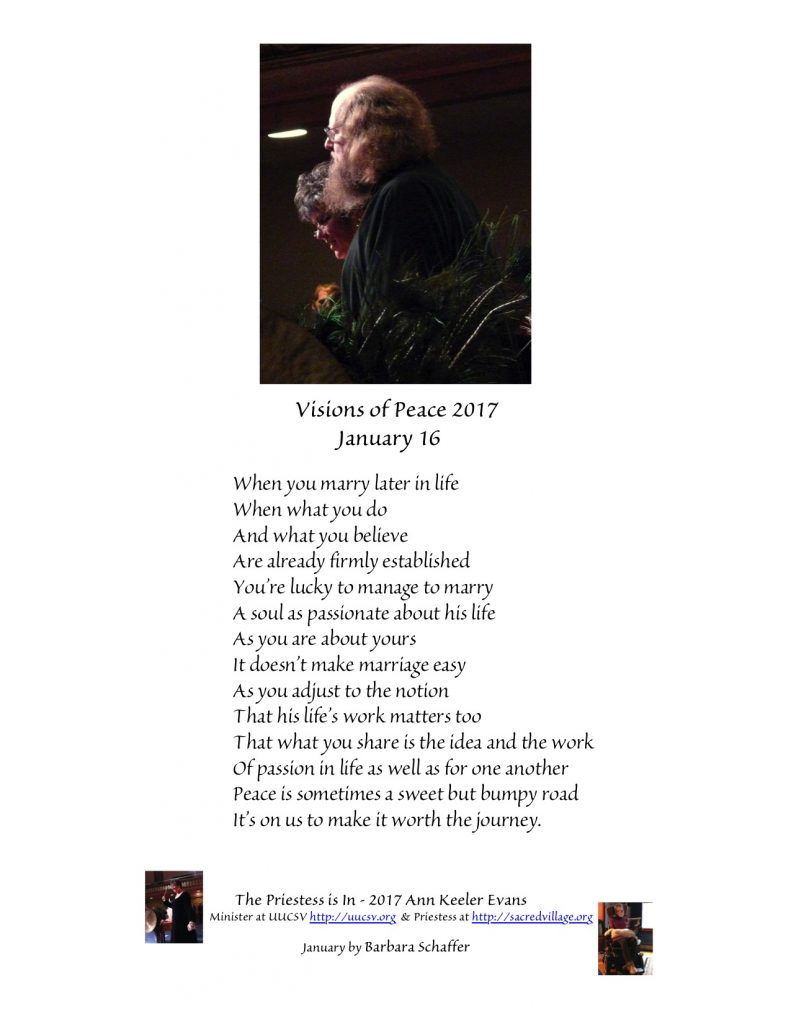 My father died, officially of old age, 7 weeks after this photo of Betty was taken. He announced his intention to die when Mommie and he were separated. “You’re ending my marriage, I took a vow to care for her.” They never heard him on that.

I asked him then not to go, to give me six months, since I had just lost a dear friend and my brother-in-law. He gave me seven.

He loved Betty, they had a love affair that spanned their 65 years of marriage. And even after. Whether it was Betty’s dementia or whether Sam actually showed up, he “visited” her ever day at lunch time for two and a half years. She giggled and flirted like the 22-year-old she was when she met him.

Love is a many splendored thing. We can’t know how many ways. We cannot count them.

Love is a Peace all its own. Let us Love. Let us Peace. 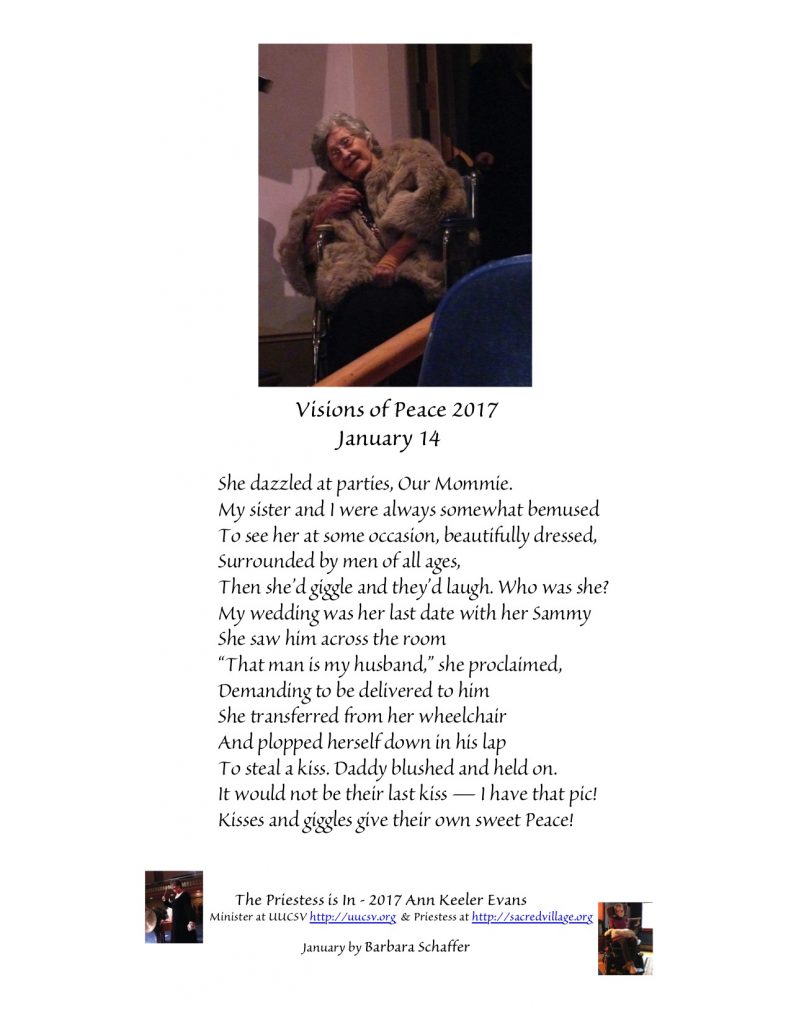 This process I’m engaged in, the daily writing and this year the daily reacting to images, is fascinating. I’ve had people say I don’t know how you decide what to write every day.

Some days I make a conscious decision. But often the picture really does say what about this… or the person taking the picture suggests it.

But I was surprised by my reaction to the icicles. I love icicles. as a child i loved those winters when there were lots and you would knock one down and suck on it like a lollipop. (yeah, can you say asbestos shingles, anyone?)

But there i was, looking at them, and then i thought about its being my anniversary today and then Rumi’s poem was in my head and i was writing the poem. Icicles and marriage. Icicles and peace…

It’s a good question to ask myself, do I dare to Peace in my Love? When I say it’s so important in other parts of life? Do any of us dare?

I find it especially poignant when I look at a world that is in such desperate need of Peace and Love. So can I start at home? Do I?

Peace. Icicles. Yep. “Stand together, but not too near together.” 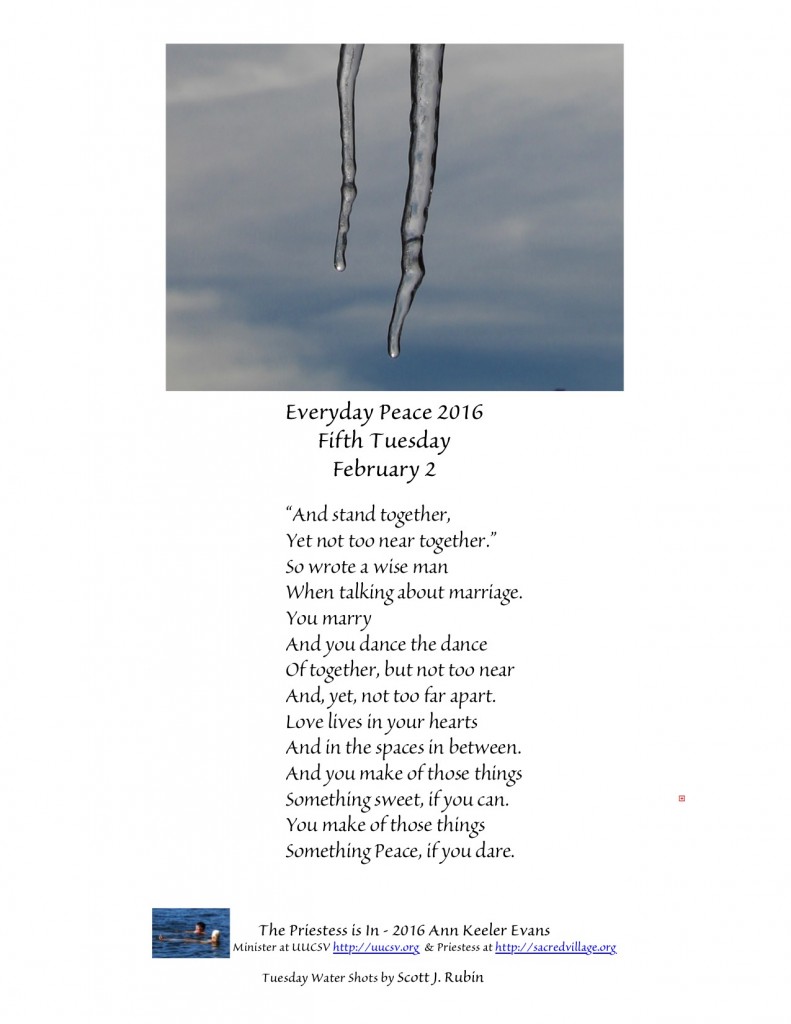 Dear Bartender and Priestess: For the last ten years I have been married to “Shaun”. We’ve both been married once before. Shaun and I get along well and like many of the same things, so courting seemed easy. It wasn’t long after we were married, though, that he informed me we were going to split every expense exactly down the middle. Everything, 50-50. END_OF_DOCUMENT_TOKEN_TO_BE_REPLACED

It’s what happens in small towns. Your life changes, people die, but life goes on in the place you once thought of as home.

Twice now, I’ve had the privilege of being in the homes of the people who bought the homes my family owned.

Yesterday I stood looking for the doorbell at what was once my sister’s home. It turns out they’d taken it down because it malfunctioned. But the fact was I didn’t know where the doorbell was because of course I never had used it. That almost derailed my ability to go in that house — thanks for the reminder, reality.

But once inside, it was all warmth and sweetness. The house does look great. It’s fine that it’s familiar. Or it was yesterday.

I could tell them the story of Jack and Jane — a great love story — who married in what is now their dining room. We could sit around the table that they obviously sit around a lot. and she’s as silly a decorator for seasons as Deb was.

They talked very seriously to me about their plans to love the house… as if I had to be assured they would do right by it and i told them how deb and nan and i all planned to rock on that porch with sippy cups in our old age… and laughed that I’d be over. They laughed too.

And so they were married.

And it was bittersweet. But, it’s the season of bittersweet isn’t it? And it is bright and glossy orange. And sacred, it seems.

And the sweetness is still there. And there is a great deal of Peace in that. (And did you see that Frosty Moon last night? It was beautiful. 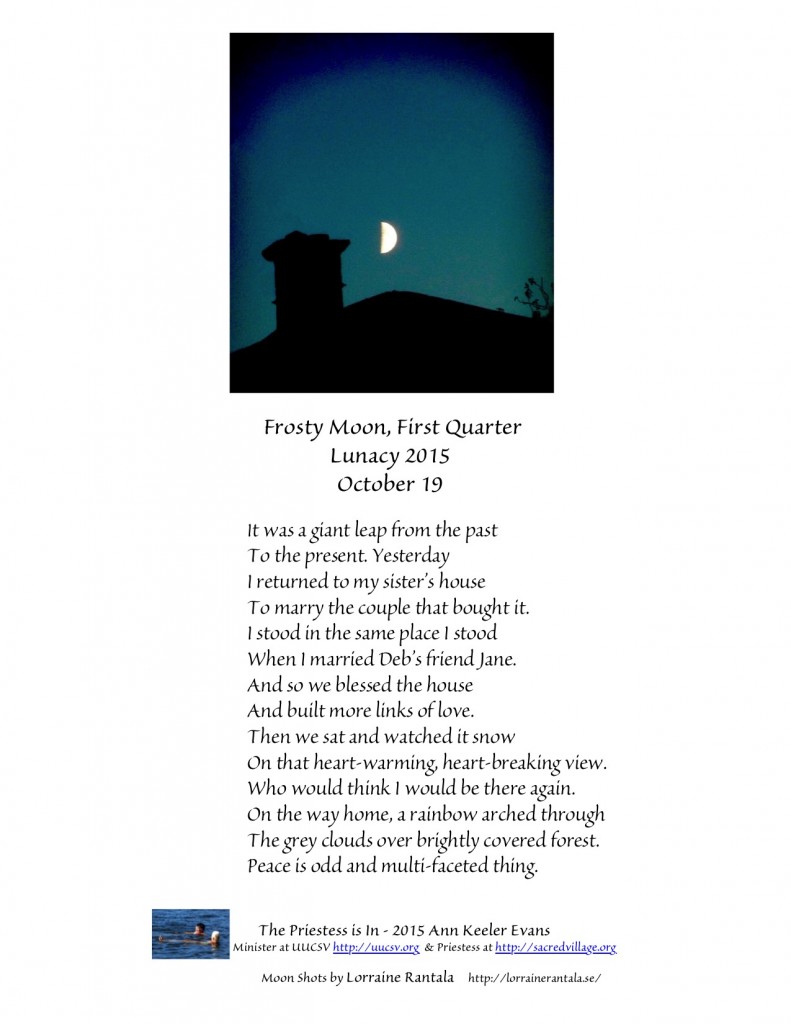